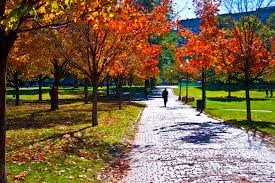 In Chicago, autumn takes its time to fade the leaves, to wither the flowers to replace the summer heat with the uncertainty and the folly of rainy days, so it often starts early.   Its skyline, lake and river are laid up in such a manner that no matter how harsh the weather may become, they are always a delight, especially in September.

The Trump Building may suddenly rise up to the clouds right in front of your eyes, or a rainbow can appear for just a second to catch your attention in the midst of doing a million things. This year, there is an extraordinary exhibit of Magritte at the Art Museum. Under a suggestive title, “The Mystery of the Ordinary,” the curator chose twelve particular years (1926 - 1938) of the painter’s work to reveal certain aspects of his art.

The visitors are strongly encouraged to take a deep look through his surrealistic vision; one in which misleading objects and models disclose a senseless world. He claims the value of the image at a time when the words had become weak, deceitful and dishonest. Nevertheless he took time and dedication, with abundant and wordy explanations to justify his thoughts and aims. Samples of his handwritten ideas are carefully displayed to further charm the avid admirers.

Chicago’s Millennium Park is always there to wander and contemplate the mysteries of many forms of art and nature. In September, the city is particularly rich in providing excellent music, a dance festival and tours through the gardens. On its magnificent scenario, performers from all over the world have come to fascinate audiences from everywhere. People gather there to experiment osmosis to bloom with enhanced vitality.

Chicago seems more cosmopolitan in autumn. Its weather is milder than during its tough and windy winters, hot and humid summers or rainy springs. Besides a large network of art, science and industrial museums, its zoo, aquarium or the Navy Pier that are always there, September offers the golden reflection of its waters and the silvery shine of its buildings

If it happens to be a Tuesday in September, The Modern Art Museum offers a fantastic jazz presentation on top of their permanent and incidental exhibits. This year, Frieda Kahlo’s two paintings are on display in a rather circumstantial context concerning her influence on transgender artists and her standup position against all forms of gender discrimination. The exposition also offers a great chance to discover Iran’s film director Shirim Neshat and singer Sussan Deyhim  through a video that reveals their  extreme talents.

As any other month of the year, September is a good time to taste something new and exciting. Whoever believes that American food consists only in hamburgers, ribs, coleslaw and hotdogs, should stop at Hoyt’s at 71 East Wacker Drive to taste their sea bass and for dessert, goat cheese pie with pickled blueberries and olive oil. For true Spanish tapas, Mercat a la planxa  at 638 S. Michigan Ave.

Before touring the southern neighborhoods of Chicago including a peek at Barack Obama’s home, stop at the Iarcas gallery (just a couple of blocks away from the tapas), owned by the Rumanian artist Costel Iarcas. He may be willing to talk about his numerous and diverse paintings as he thrives in a very competitive world.
There is so much to do in Chicago, especially in September. I am already looking forward to going back as soon as autumn starts fading the leaves and withering the flowers next year!